Handstand Kids cookbook. Proving you don’t need a blue Easy-Bake Oven to get boys to bake 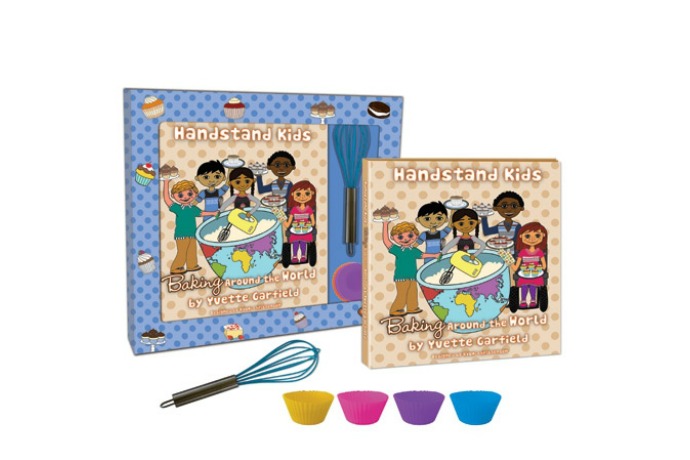 Although Easy-Bake ovens are now coming out with “boy-friendly” versions (what, girls don’t like blue?), there have always been lots of options for boys to cook–really cook–with the help of great products and cookbooks for kids.

Handstand Kids is a longtime favorite company of ours. We love that they have an inclusive baking book that doesn’t have smiling girls holding pink cupcakes on the cover. In fact, any budding bakers in the family will want to get their fingers all over this book.

The new Handstand Kids Baking Around the World cookbook is perfect for any kid at all who has visions of sugarplums–or chocolate chip cookies–dancing in their heads.

Like its predecessors, Handstand Kids’ Handstand Kids Chinese Cookbook and Handstand Kids Italian Cookbook, the new Baking Around the World cookbook stars five multicultural kids, three of whom are boys. Broken up into four sections, the recipes cover cupcakes, cookies, cakes, and sweets–in other words, don’t expect to find a recipe for kale.

But I have to say, I’m impressed that the red-velvet cupcakes in this recipe get their color from beets. And: The Korean Sweet Potato Cake includes a good dose of vitamins from the veggie it’s named after.

I also love how many countries the kids visit, like India for Nan Khatai, and Mexico for Tres Leches Cake. Still, even with this culinary globetrotting, the ingredients used in the recipes are ones that you can easily find in most supermarkets.

I feel the cupcake chapter is the weakest of the four, in that the cupcakes all feel traditionally American to me, and the recipes make no reference to any other culture — or even region of the country, like the south for red velvet cupcakes. Unless…is cooking cupcakes in an ice cream cone a French tradition that I’ve missed? Probably not.

Packaged with a little sturdy whisk and four silicone cupcake holders–you will need more, trust me–Handstand Kids Baking Around the World will make a great gift for boys and girls who can’t wait to get into the kitchen. Just make sure you make them stick around for the most important part of baking: cleaning up.

Find the Handstand Kids Baking Around the World cookbook at our Amazon affiliate or an indie bookseller or toy store near you.