General Mills cereals get rid of all artificial colors and flavors, and parents cheer. 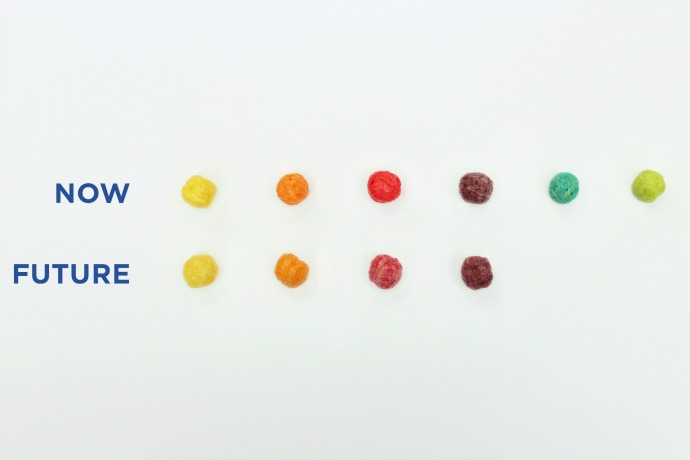 A few months back, at the Mom 2.0 summit, I had the opportunity to sit down with a few folks from General Mills and speak candidly about what’s on parents’ minds when it comes to their products and the concerns that we hear from our readers.  Like sharing how today’s generation of dads — a more involved, dedicated group of fathers than ever before — would reallllly appreciate the Kix slogan changing to Kid tested…parent approved. Can’t say I disagree, and I’m still holding out hope.

But hey, one other, arguably much bigger concern of a larger group of parents that we had discussed is about to change: The use of artificial food dyes and colors in GM cereals. They shared the news in advance with me then, and now the announcement is official.

The plan is to phase out all but natural flavors and colors in every one of their cereals by 2017, with nearly all of them changed by next year. So basically all artificial flavors and “colors from artificial sources” are going to disappear from the GM cereals that currently use them — remarkably, even Lucky Charms and Trix.

To me, Lucky Charms is like the embodiment of artificially colored foods; even if I’m not above putting them to good use in indulgent St. Patrick’s Day treats once a year.

Related: 4 Lucky Charms dessert recipes that are all about those marshmallows

I have spoken with so many parents about their children’s sensitivities and extreme reactions to food dyes, ranging from hives to asthma to hyperactivity and mood changes. It’s scary stuff. So I’m thrilled that this opens a few more options for them, and more importantly, eliminates a few more foods on the No List.

What a relief not to have to worry that if your son eats a handful of Reese’s Puffs at a sleepover, he’ll come home with some awful reaction.

That also means that Trix will not have any more bright green colors in it (shown at very top), but I think kids can get over that the same way I got over the loss of the tan M&M. Eventually. According to an infographic going around, the yellow Trix will now come from turmeric extract; the red and purple Trix from fruit and veggie juices like blueberries; and the orange Trix from Annatto extract.

(I do have to note that there are people who also have sensitivities to Annatto, despite it being naturally derived from the seeds of the achiote tree. So if your kids have issues along these lines, you still need to read labels carefully. But I’m sure you already know that.)

Now let’s be frank, processed convenience foods are still just that, so it’s not it’s not like this is going to make parents who cook whole grain oatmeal from scratch every morning suddenly switch to Reese’s Puffs this winter; or that we’re going to be telling the world that Chocolate Chex are now a top healthy food pick. (Though they definitely are delicious.) But as a mom whose kids grew up on Cheerios and who won’t turn down a bowl of peanut butter and chocolate flavored anything when offered, I think it’s a great move.

And when you consider that General Mills also owns brands like Haagen-Dazs, Yoplait, and Pillsbury too, maybe there could be more to this story down the road. We’ll keep an eye on it.

Read more about the move to remove artificial colors and flavors from all GM cereals by 2017 on the General Mills blog. The best part is reading some of the happy comments from parents in response.