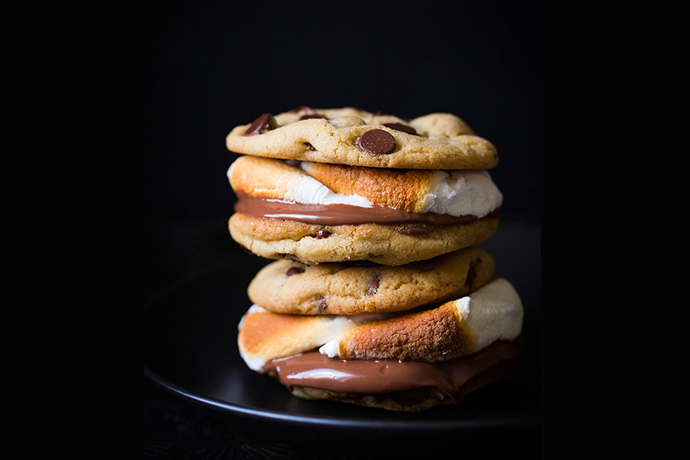 Last week’s camping recipes got me thinking. Not about camping—I did that once this summer and, well, once a year is my limit. No, they got me thinking about s’mores, and not just campfire s’mores. There are tons of s’mores recipes inspired by the classic camping treat, from s’mores cupcakes to s’mores ice cream sundaes, that can be made anytime, anywhere. And how could we not share the best of those with you so that you can have s’mores anyway you want them.

What can I say, we’re here to serve.

Sometimes, when you begin riffing, it’s best to start with two known quantities like s’mores and chocolate chip cookies. If these Chocolate Chip Cookie S’mores at Cooking Classy are any indication, it’s the right things to do. Just like putting the two together. Yum.

These Funfetti S’mores Cupcakes at Something Swanky have a buttery graham cracker crust topped with fluffy funfetti cake filled with marshmallow creme filling and iced with milk chocolate ganache and a toasted marshmallow. Whoa. If you love the sound of these but are intimidated by the number of elements, consider making them with store-bought cake mix and skipping the marshmallow creme filling. Or go all out. These seem worth it.

There are many variations of S’mores Cookies, but this one at Sprinkles For Breakfast is particularly appealing, and not just because they are pretty. In fact, the secret ingredient is something you can’t see. The dough is chock full of graham cracker crumbs to make sure that a strong s’mores flavor comes through. I love that these aren’t a nod to the campfire treat in name alone.

Related: 15 of the best camping recipes that make camping worth it. Yes, really.

I may be a generally healthy eater, but I’m a sucker for anything made with sugary cereals (you know, the kind I won’t let my kids eat for breakfast). These S’mores Bars at Gimme Some Oven are are a decadent brownie baked on a graham cracker crust and topped with Hershey’s bars, Golden Grahams and mini marshmallows and I cannot wait to make them. I can’t think of a more perfect way to get my trashy cereal fix.

When we rounded up camping recipes last year we found this mouthwatering S’mores Dip from Hungry Brownie. The recipe was created for the stovetop, but works on a grill or campfire as well. So, basically, you can make these anywhere you like. Which means you can make it anytime you want.

I was intrigued by this recipe for S’mores in a Jar at Cupcakes and Cashmere because, well, look at it. Then I realized that it was inspired by a dessert at one of my favorite spots in Los Angeles, Superba Snack Bar. Anything from—or even inspired by—Superba is a keeper for me. I’m all over this recipe like a melty marshmallow on graham crackers.

If you’re making s’mores for little kids, skip the fancy recipes and go for these super fun DIY Monster S’mores that we found at Say Yes. We thought that they’d make a great Halloween treat (and they do!), but they’re also pure summer fun.

If you love s’mores as much as we do, be sure to follow us on Pinterest where we discover snack ideas for kids, easy family meals and, of course, all things s’mores.