Can the Nima portable peanut or gluten tester save your life? We tried it out. 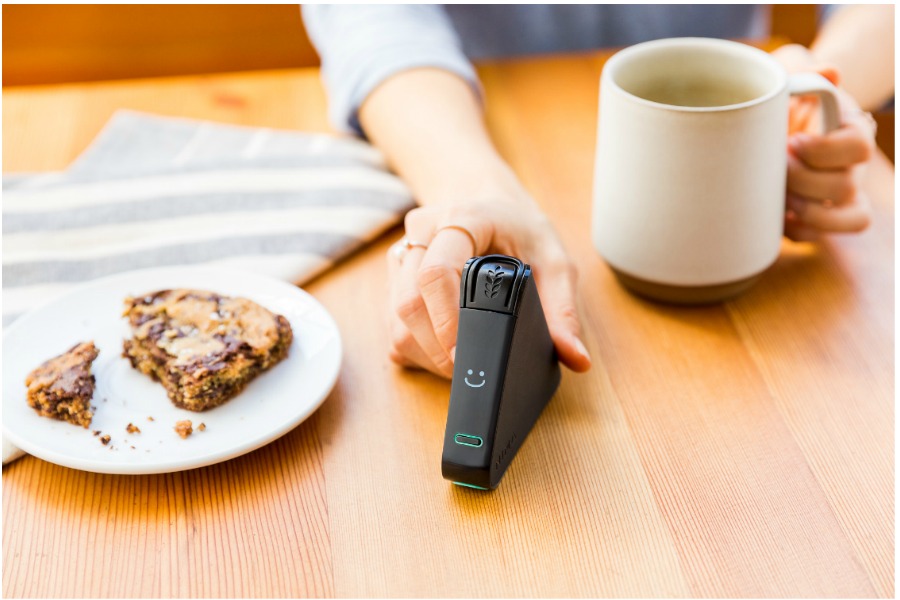 If you’re the parent of a child with a severe or even life-threatening food allergy, you know how terrifying it can be simply to eat out, even at a trusted restaurant. And a portable new device called the Nima Peanut and Gluten Sensor is determined to help, by providing an extra check of foods that might be contaminated with a food allergen.

Currently available in models to test for either peanuts or gluten (which is only available through their site at this time), the Nima sensors provides that extra peace of mind on top of the things I’d already do, like checking ingredient labels and talking to waitstaff.

But, because people make mistakes, Nima can provide a really welcome safety net of sorts before the food reaches any lips.

We learned about the Nima sensor back in 2018 at CES, but we wanted to wait to try it out ourselves before making a recommendation. Here’s how it went for me.

Updated May, 2022. Please note the company has since been acquired and is now called Nina Partners
This post contains affiliate links and some purchases may generate a small commission, which helps support our independent business at no additional cost to you —  so thank you. 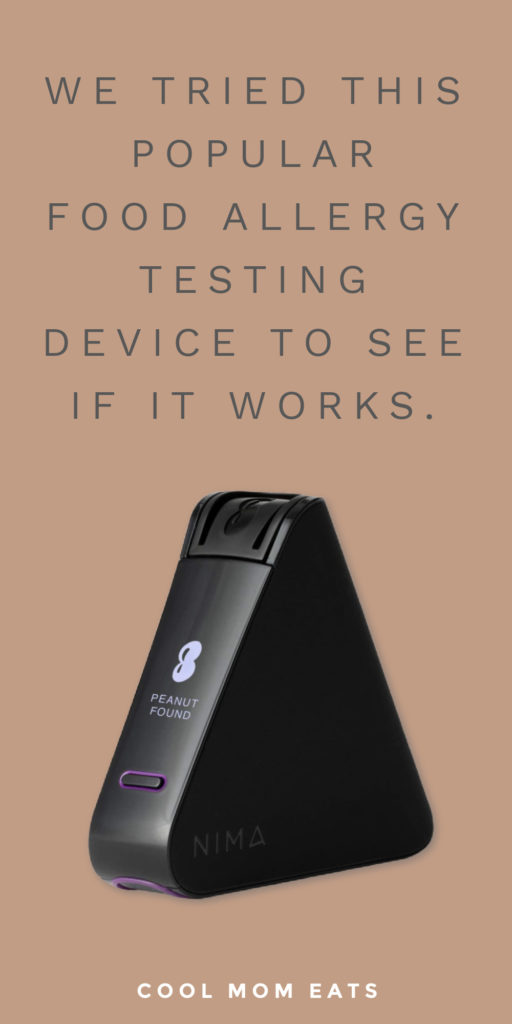 How does the Nima Sensor work?

Small, sleek, and very portable, I tried out the Nima peanut allergy tester and was pleased to see how easy it is to use when you’re out and bout. Just insert a pea-sized morsel of food or bit of liquid, put it into one of Nima’s disposable capsules, then insert into the Nima sensor base.

The rechargeable sensors look for the allergen’s proteins in the food sample, and will alert you with either a happy smiling face for “yes, it’s safe” or a peanut or wheat sign for “beware!”

If you want to get into the nitty gritty, you can read all about the science on the Nima Partners site. 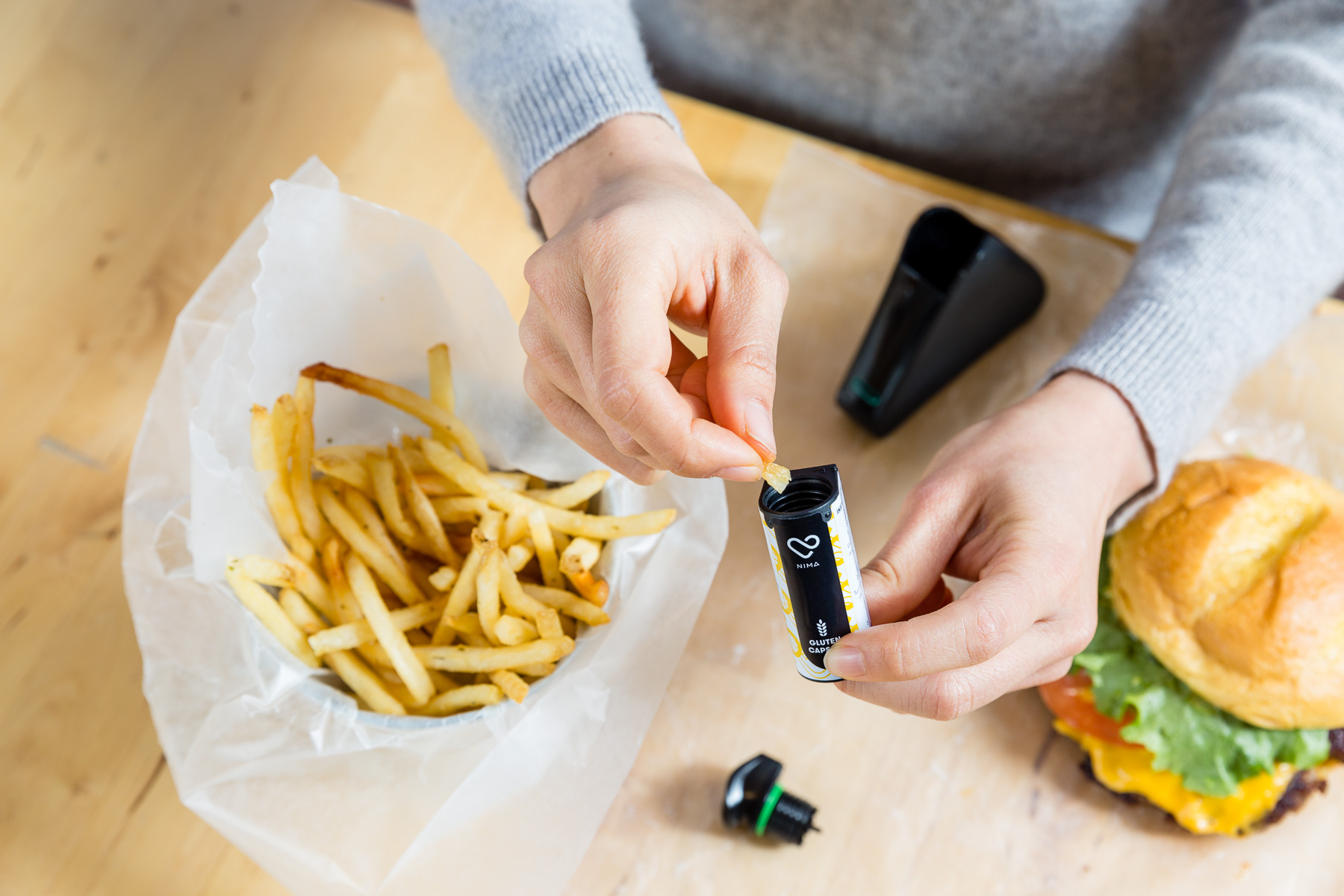 Is the Nima Tester accurate?

Overall, the Nima Peanut Sensor was right on the money all five times I used it. Or, at least four out of five. I have not yet tried the Nima Gluten tester.)

It discovered the presence of peanut in obvious places like peanut butter crackers and cookies, but also in less obvious dishes like the green beans that had been stir fried in peanut oil. Nima also gave us the appropriate go-ahead on lentil chips that were labeled “peanut free.”

Only one inconclusive result was found — when I analyzed cookies that are listed as “manufactured on equipment that also processes peanut products.” In that case, the Nima allowed us to make the assumption that the cookies were not safe to eat so I’d call that a win, even if not definitive.

I should note though, that it does takes about five minutes for Nima to deliver a result, which can feel like an eternity when hot food has been serve —  especially for a hungry kid. But then, it beats the traditional at-home test kits which can take up to 25 minutes.

It also beats not being able to try a new “safe” food at a favorite allergy-friendly restaurant or a friend’s birthday party.

Yep, there’s an app for that. 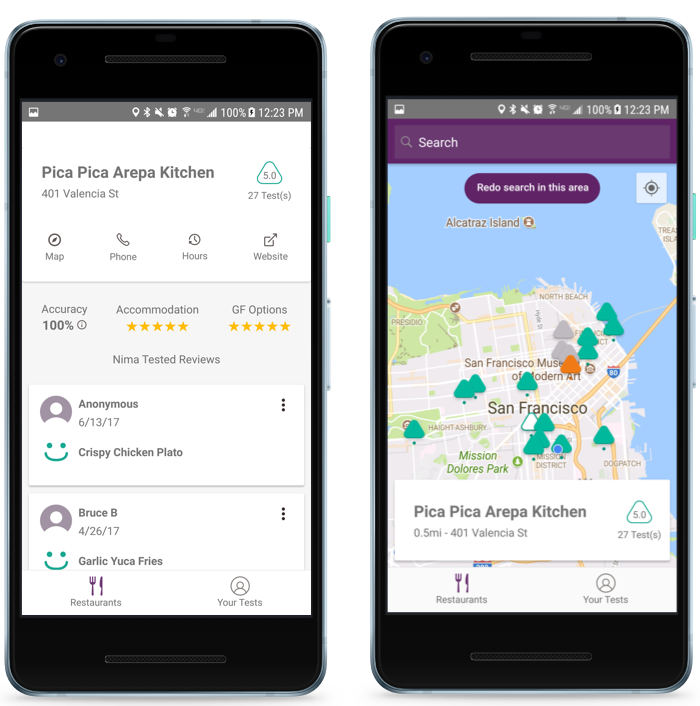 The companion Nima app is a nice touch. I especially like that it lets parents help other parents — just pair your sensor with the Nima app to share your results with the community and help build a database of safer places to eat and products to buy.

The app also includes an easy-to-use map to help you find restaurants that have been tested before by other Nima users. This feature will hopefully become a great resource as more and more information is downloaded to the app.

So is the Nima worth it?

Unfortunately, but not surprisingly, Nima is not cheap: The retail price is now $139 (down from the original $300, phew!) for the peanut sensor including a dozen one-time use capsules. Additional capsules are about $6 each (sold in twelve packs) which will definitely add up if you eat out a lot or need to test multiple dishes at one meal.

The Gluten sensor, purchased through the Nima Partners site, is $279.99. But keep your eye out for subscription deals from the new site.

Just know that you cannot use the gluten and peanut tester interchangeably — they are different products. Meaning that if you or your child have an allergy to both ingredients, you would need to order two separate Nima testers. 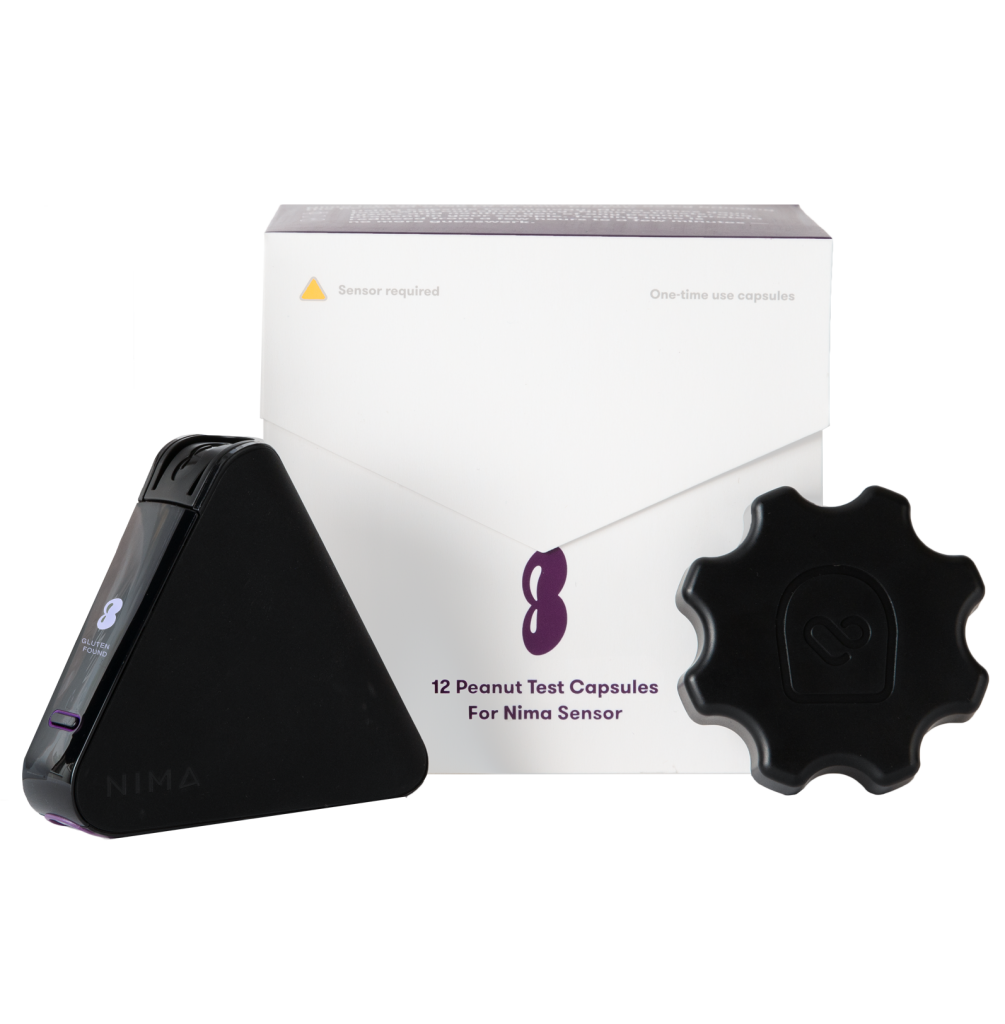 And of course, I must say that as a parent of a daughter who once had a serious dairy allergy, I don’t think I’d ever feel 100% confident that a portable sensor or testing kit of any kind will get results right 100% time (even if they do), and I would certainly still have an Epi-Pen at the ready when eating out.

On the other hand, compared with the price of using that Epi-Pen — financially, medically, and psychologically — the Nima could be an investment well worth making, as one more respectable layer of protection for people with allergies. Especially when those people are our kids.

Bonus: If you have an FSA or HSA plan through your employer, and a diagnosed allergy for one of your covered family members, the capsules should be reimbursable through that program.

I’d say all in all, this is exciting. Especially because the Nima shows a lot of promise for future consumer products that may be able to test for multiple allergens at once. Because it would be so wonderful to know that everyone in the family can always come to the table.

Visit the Nima Partners website (formerly Nima Sensor) to read more about this food-allergy testing device which screens for gluten proteins in food. You can purchase the starter kit on the site, as well as additional capsules. The original Nima peanut tester, which CME tried, still has units available solely through Amazon and shipping via RSR Partners, a technology wholesaler of Ohio.