What happened when I did a 3-day juice cleanse: 5 surprising results. 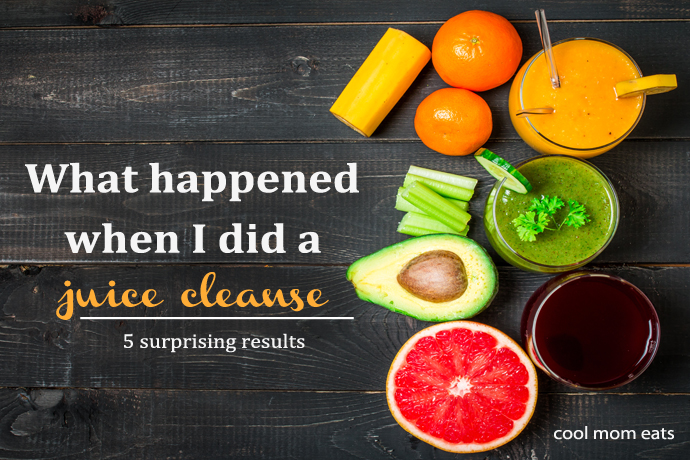 After a fall and winter full of eating and not full of working out, a few weeks ago I decided that I needed a reset. My pants hadn’t fit in months, my energy levels were terrible, and my moods were swinging like crazy. And with 40 looming, a change had to be made, and something drastic at that. So, though I never thought I’d do one, I decided to try a juice cleanse. As in, no chewing for days.

Yup, I went there. I headed to my local juice bar, ordered up their finest 3-day juice cleanse, and gave it a whirl. And, well, I have to say that I was super surprised by the results, not to mention the lasting effects it’s had on my life. Let’s just say that I haven’t stopped talking about my experience.

If you’ve ever been curious about a juice cleanse and whether it’s worth the money, you’ll want to hear what happened to me. Here are all the details. Yes, including weight loss.

1. I felt hungry. But mostly because I didn’t plan ahead. The first day went pretty well for me, but on the second day I had to travel and ended up not packing enough juice for the road. By the time mid-afternoon rolled around, I was famished and my blood sugar was really low (cue the shakes!). I ended up having to devour a few pieces of dark chocolate that I had stashed in my car to get me home safely.

Other than that one instance, though, I didn’t feel as hungry as I thought I would. I’m not going to lie. It was tough having to prepare meals for my kids on my juice cleanse days, but I never felt like I was going to explode from hunger.

2. I stopped drinking coffee. For good. I was pretty much a one-pot-a-day coffee drinker about a month prior to the juice cleanse. I’d slowed down to about a cup a day right before juicing, so cutting it out cold turkey was not as hard as it might have been. But, still, I had to get off caffeine completely for the juice cleanse, and you know what? I’ve stayed off since then and feel great. I can’t necessarily correlate some of the positive changes I’ve noticed (like my skin, for one) to kicking coffee, but I really believe it’s had a positive physical effect.

Side note: I do miss the ritual of drinking coffee and, as a work-from-home mom who often sets up camp at coffee shops, it’s a little weird to be abstaining from coffee all together. But I’ve stocked up on herbal teas and have been surprised at how easy it has been to keep from going back to joe.

3. I learned a ton about my eating habits. It turns out that when you’re not eating food, you get a really good sense of when you get hungry and how you tend to fulfill that need. I discovered that my appetite remained in check during the day, but once the kids got home from school—and I needed to prepare snacks, dinner, and school lunches for the next day—I was tempted to eat non-stop until bedtime. I learned that I was feeding myself a meal (and probably more) while preparing food, and then sitting down with the kids to eat another one.

This realization helped inform post-juice cleanse changes to my lifestyle, like eating earlier so that I’m not tempted to stuff my face from 4pm on.

4. I had more energy. After I made it through the majority of the first day, I felt better than I have in a very long time. I’ve heard people can either feel fantastic or terrible during a juice cleanse and, I have to say, I felt fantastic. I attribute this to the fact that I had been eating like crap for so long that my body was probably thrilled to be eating delicious, fresh juices made from organic fruits and veggies. I’ve heard from super healthy people who do a juice cleanse that the opposite happens and they actually end up feeling worse.

I can’t speak for anyone else, of course, but I was really shocked at how much energy I had during the day and how refreshed I felt in the morning. I’ve continued juicing since the cleanse and still feel great, even though I’ve added food back into my diet. A win-win, if you ask me.

5. I lost 10 lbs. And kept it off. Mostly. Yes, 10 lbs, you guys! I’m not sure why it’s so surprising to me that I lost that much since, after all, I didn’t eat food for three full days. Nonetheless, I was shocked when I saw the number on the scale.

Granted, I’ve gained a few pounds back since going back to food but, overall, the cleanse kick-started my weight loss, which is still in progress, by the way. Let’s just say that it’s much easier to motivate to eat right after being able to wear my jeans again after just 72 hours. Especially having lived in leggings for the past few months.