Why a new CDC report is leading an advocacy group to call chicken “America’s most dangerous food.” Yikes. 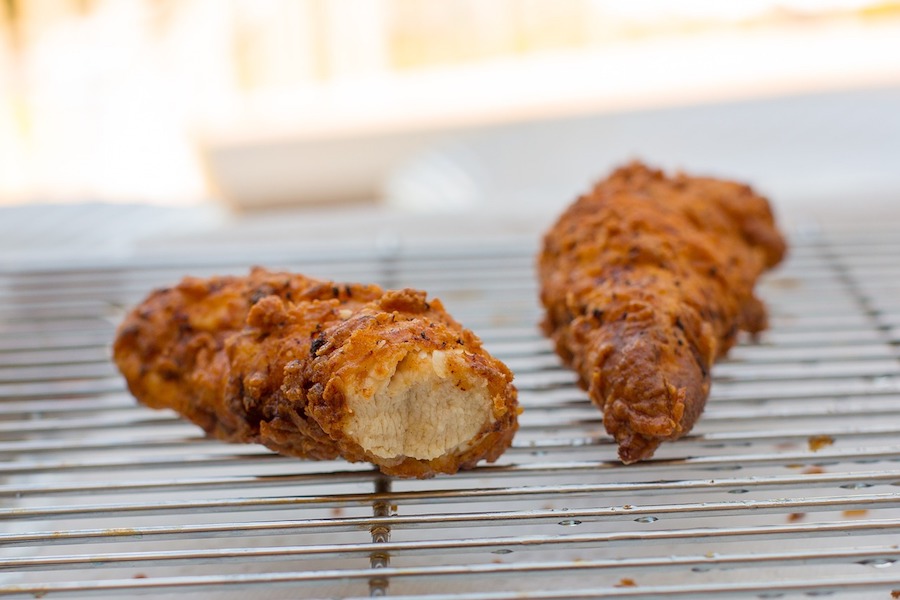 A new CDC report has lead the Consumer Federation of America to call chicken “America’s most dangerous food,” which may sound a bit alarmist, but a press release about the situation I received late yesterday had me seriously disturbed. I don’t know about you, but as a parent, I certainly have some big chicken fingers fans in my home.

It seems the weakening of consumer protections in the US is creating a lot of unnecessary risk, and this food safety alert details the excessive risk of Salmonella contamination in chicken across the US.

(Note: This article has been updated to clarify comments made by the CFA, and not the CDC)

Why is this happening?

Well for one, weaker protections by government regulatory agencies are responsible. In fact — if you can stomach this — chicken processing plants are legally allowed to allow up to 15.4% to test positive for Salmonella. That’s 8 out of every 52 samples!

This limit was only established in 2015, after 20 years of public pressure. And even when plants do violate these new, already loose standards, the penalties aren’t particularly tough.

For example, Sanderson Farms, the third largest chicken company in the US and the same brand that tested positive for Ketamine, amoxicillin, penicillin and other drugs in their “natural” chicken last year — apparently violates standards in 10 of 11 of their plants according to the CDC report.

And yet, here they are. Still churning out chicken that families everywhere are eating.

If you want to get into the data, check out this USDA chart which rates the top poultry farms and processing plants.

Those that score a 3 are exceeding the maximum allowable percent for the Salmonella or Campylobacter positivity. Their chicken includes more than 9.8% positivity for chicken, or more than 7.1% in turkey.

A 2 means they are meeting the percentage — which doesn’t inspire much more confidence. A 1 is the best score.

The companies with a score of 3 indicating the highest risk of contamination include:

(Please note: Many of these companies have multiple plants which may have scored a 1 or 2, so it’s good to know exactly where the poultry you eat is coming from and who is making it.)

So, what chicken and poultry is safe from Salmonella?

The companies that consistently score a 1 in the USDA chart are the two companies with Kosher in the name: Empire Kosher Poultry, Birdsboro Kosher Farms. So maybe start there if you’re looking for safer choices in your local grocery aisles.

Other big brands that scored a 1 include Butterball (phew), and all Wayne Farms plants which are responsible for Wayne Farms, Platinum Harvest, Dutch Quality House and Chef’s Craft brands. But there are certainly others tat do better than some.

What can we do to fix this?

Well for one, we can start paying attention. When you hear politicians bragging about “deregulation” in the news, what they’re really proud of is “taking away protections” because they help save corporations money.

The FDA didn’t even have the authority to issue mandatory food recalls until 2011’s Food Safety Modernization Act — but the vast majority remain voluntary.

And now, consumer advocacy and environmental groups are on high alert, continually pushing back against an administration with with a goal of slashing food safety budgets including the elimination of USDA inspectors in favor of self-inspection.

What’s more, plants that opt-in to self-inspect would be rewarded with the elimination of federal rules for “maximum line speed,” which can create even more food safety issues, let alone worker safety issues.

The other thing we can do, is that when we discuss this, it’s important that we don’t get sanctimonious about eating organic or farmstand-only. While organic and free-range chicken do have a lower risk of Salmonella contamination, it still exists.

That aside, it’s important for us all to look out for each other, and stand up for families who can’t afford smaller-production meats for their families. Organic chicken may cost as much as ten times more than generic store-brand chicken! That’s prohibitive for most of the country.

Oh, and in the meanwhile, please be sure to cook your chicken to a minimum of 165-degrees before eating. No chicken tartare, cool?

So, can we really make changes that matter!

Yes! So many of these issues are preventable — provided we get involved.

In fact, European countries like Germany, Denmark, Finland and Sweden, have integrated farm-to-fork food safety programs, leading them to lower foodborne illnesses through stronger consumer protections and a “zero tolerance” policy on Salmonella.

It would be great if the US could do that too.