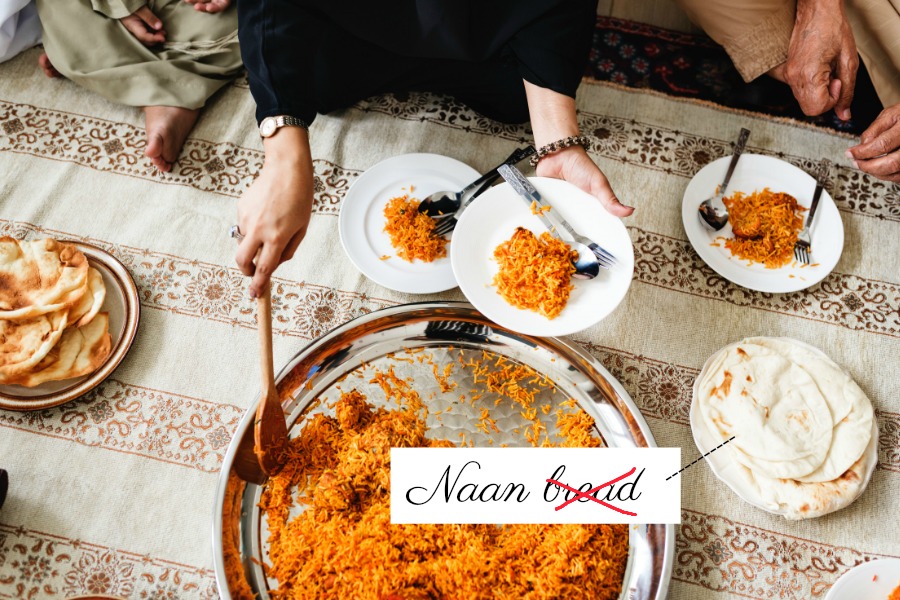 Yesterday I caught this uber-viral tweet from Amna @AGlasgowGirl on Twitter that made me laugh. She wanted to remind us all that when we order “naan bread” in an Indian restaurant, we’re actually ordering “bread bread.”

It made me think of all the foods we frequently order wrong. And by we, I mean you.

Related: What’s the difference between a crisp, a crumble and a cobbler?

Naan Bread – Naan is already bread. So while westerners may think of it as a kind of bread…you’re still saying “bread bread.”

Chai Tea – This is like ordering “tea tea,” because in India, “chai” is the word for any kind of tea. If you want to order that warm, milky spiced tea, the proper order is Massala Chai.

Queso Cheese – Queso is literally “cheese” in Spanish. Over the years, I’ve come to learn that regionally, some people shorten Chile con Queso, or that warm, spicy Mexican cheese dip (mmmm) as simply “Queso.” So I can see why you might be asking about queso cheese — as in the cheese for making (Chili con) Queso. But that would be wrong. Sorry.

Macaroons – We’ve been through this before! Macaroons are not macarons. If you are looking for the delicious French cookie sandwiches made with almond flour and exotic flavored fillings, that would be a macaron. If you want the traditional Kosher for passover coconut based cookie, that would be a macaroon. If you’d like the president of France — that’s something else entirely. 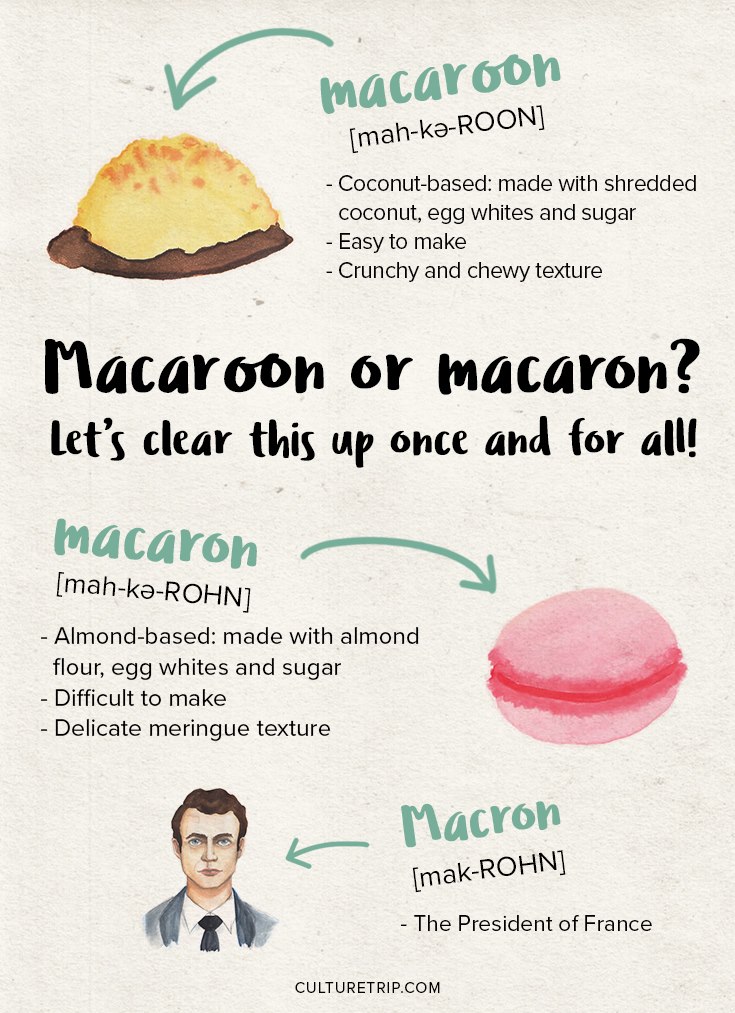 A helpful guide to macaroons vs macarons via Culture Trip
Paninis – In Italian, “panino” is a diminutive of “pane,” or bread, making a panino a little bread roll. If you are ordering more than one, you’re ordering “panini” — no s. Kind of like how there are no mooses or fishes. (Then again, Italians like to say “fishes” so maybe that’s payback for “paninis.”) I will note that in fairness, “paninis” has become acceptable as the plural, but it’s still nice to get it right when you’re ordering from actual Italians.
Crudités – In French, you don’t pronounce the s at the end of a plural noun. So if you’re saying crew-dih-tays, you’ve got most of it right! Just lay off the s at the end.
Gyro – If you’re pronouncing this Greek sandwich like the shortened version of a gyroscope with a soft “g,” it’s incorrect. The proper pronunciation is…yee-ro. Not to be confused with a hero. Which is also a sandwich, especially if you live in New York.
Sake – A lot of people pronounce this delicious Japanese rice wine SAH-key,  rhymes with maki. (Also delicious, as long as you’re eating Japanese.) The pronunciation is sah-KAY, with the emphasis on the second syllable
Salsa Sauce – Salsa literally means “sauce,” so no need to order “sauce sauce” if you’re eating Mexican or Spanish food. I don’t hear this one too much anymore, but back in my Mexican restaurant table-waiting days, I definitely did, right along with “…oh, and can I have a side of Guatemala with that?”
Espresso – Do you see the letter x anywhere in “espresso?” Good! That settles it.

Look, I get annoyed by pedants who insist that hummus should be pronounced hoo-mus, or swear there is only one acceptable pronunciation of “caramel.”  We’ve got so many regional dialects in the US, which is one of the cool things about having such a diverse population. But I still think it’s nice to know what’s truly right and wrong. Good language matters!

Just please, please don’t say cruh-sant for croissant. Even if you grew up on “croissandwiches.”  Shiver.