What happened when I stopped worrying about feeding my picky eater. 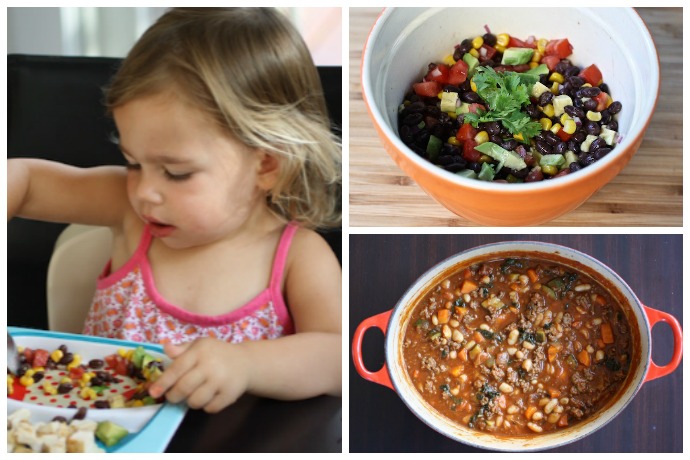 Defining a picky eater can be hard. Some would argue that my toddler doesn’t fall within the typical guidelines because, yes, she loves broccoli, but she also doesn’t like normal “kid” foods like chicken breast or pasta. The part of feeding my picky eater that I find most frustrating—borderline infuriating—is that she isn’t governed by any rules. I know, I know, that’s the definition of a toddler but, as we all know, it’s not easy during feeding time.

When I get the (often-irrational) sense that my children are malnourished, I’ll make a simple, healthy meal that I “know” she loved last time. And then, as if on cue, Little Miss Fickle changes her mind and won’t eat any of it. I’ve spent more time than I’d like to admit in the pasta aisle trying to rifle through my frazzled memory about which type she’s eaten before.

Most likely this is her age. And (yes, Mom) she will probably grow out of it. Or not. But either way, it’s real and it affects my day-to-day life, and I’m willing to guess the lives of a lot of other parents out there too. So I decided to take on a little experiment for my fellow home cooks: What if I fed my toddler the same undesired food consistently for a week? Would she learn to love it? Hate it more? Here’s what happened:

Related: Two fun resources to can get a picky eater to actually eat.

Feeding My Picky Eater: The experiment

I hope this doesn’t disappoint too many, but I didn’t choose to feature a vegetable in this experiment. I chose a protein-rich, wallet-friendly, pantry staple: beans. Beans are a great meatless protein that you can use to put a hearty oomph in tacos, chilis, soups, and to use to make a tasty side dish in a flash. Three out of 4 of us love them, so the fact that my daughter spends the duration of her meal picking them out of a dish is maddening. So, what does she get for a week? Beans! Magical toots be damned.

Oh, and being the somewhat merciless mama that I am, I threw in some other “iffy” items: chicken and pasta! She can tell her therapist about it later.

Feeding My Picky Eater: What she ate (and didn’t eat)

Meal 1: I tried to put a little love into feeding my picky eater for this simple meal: Grilled chicken breast topped with black bean “salad” (above). I tossed black beans with some of her favorite things: corn, chopped tomatoes, and avocado, and then seasoned it all with a little citrus, oil, salt, and pepper. I used this to top quick sautéed chicken breast flavored with seasoned salt, pepper, and cumin. She ate most of the bean salad, but was clearly more enthusiastic about the corn, tomatoes, and avocado. She took one bite of chicken and actually spit it out. Awesome.

Meal 2: Okay, well, this one was a fail: A side of canned beans that were rinsed, slowly cooked in a little water, olive oil, and salt and then topped with shaved parmesan. This was a case where I didn’t put so much love into the dish. The beans were the last thing she touched on her plate and she only had one bite. I think it was a texture thing.

Meal 3: I made a sausage, carrot, and white bean soup very similar to this Kale and White Bean Soup at Epicurious. This was okay—definitely better. She picked out the carrots first, but she liked the broth and sausage enough to actually eat whole spoonfuls of the soup. But in total, she only ate about half her bowl, and I know she was hungry going into this dinner. Hrmmpff.

Meal 4: I riffed on an idea from my friend One Hungry Mama and made her 15-Minute Pasta with Zucchini and Chickpeas (above). While the rest of my family enjoyed it, the P.E. did not. She ate nothing. In hindsight, going with the somewhat unknown garbanzo and zucchini paired with pasta was a bit bold. But you know what? I did worry less about her being hungry just because she didn’t eat her dinner (p.s. she didn’t wake up in the middle of the night starving).

Meal 5: I couldn’t get my act together for this one. It was supposed to be leftover white bean stew, but even I didn’t feel like it. I froze the rest and we had pizza. Sorry.

Meal 6: I went back to black beans, served in a similar style as in meal one with some tomatoes and fish. She ate about half her plate; better than nothing!

Meal 7: I wanted to try a stew again since they make fantastic make-ahead meals and the rest of us love them. This time I went with a tomato-based “Throw Everything in the Pot” chili (above) with white and red kidney beans. It worked! There were still a few beans left in her bowl, but it was a valiant effort on her part. Mine too, if I might add.

Willing to try this experiment with your picky eater? Let us know if you give it a go and what happens. Also feel free to share the things you’ve learned while feeding a picky eater. Let’s get the brain trust working—we can all certainly use the help!