How to squeeze the most juice from a lemon or lime: Testing kitchen tricks

Squeezing juice out of a lemon isn’t difficult. Or is it? I would love someone nerdier than myself to test, on average, how much juice most of us leave behind in our citrus fruits after squeezing. It pains me to toss even zested rinds knowing there could be some juice left. And since I’m constantly cooking with lemon and lime – chimichurris, weeknight chicken and pastas, vinaigrettes – I decided it was time to revisit my methods for juicing.

Our dear frenemy, the Internet, offers several popular hacks for how to squeeze the most juice from a lemon or lime. So I tested a handful of the tips for squeezing the most juice out of citrus and below are the winners.

You may be surprised at the results… and may never juice a lemon the same way again!

How to squeeze the most juice from a lemon or lime

When I first saw Stacie demo this on a Facebook Live, I had one one of those Homer Simpson d’oh! moments. Why had I not tried this?

First, cut alongside the center, not through it, as shown below.

You want to make four cuts, leaving the center untouched where the pith is the toughest.

Result: This vertical slicing yielded almost double the amount of juice compared with when I simply cut down the center. This is my absolute favorite method.

See how much surface you’re exposing with four segments?

Squeeze out the lemon segments, using your hand as a strainer (unless you have paper cuts!)

Weight includes the bowl but still, that’s an impressive amount of juice for 1 small lemon

Microwave a small citrus fruit for 15 – 30 seconds, or a little more time for larger fruits like grapefruits.

I tested this with a couple of ripe lemons straight from the fridge. I was dubious at first, but it worked really well!

The heat loosens the pulp and allows easier extraction of the juice. And while it’s not exactly scientific, I did try and use two lemons of the same size for comparison sake.

Related: 10 unexpected uses for lemons, from the perfect pot of rice to taking the itch out of bug bites.

Same amount as the slicing trick!

Okay so this isn’t actually a trick, but as far as getting a lot of juice of out your citrus, this old school school trick really does work.

I tend to eschew fancy tools for a sharp knife for most kitchen tasks, however Marsha’s pick for the absolute best citrus juicer is an exception to my old-lady ways. And it wasn’t just Marsha who picked this as a favorite way to juice citrus. 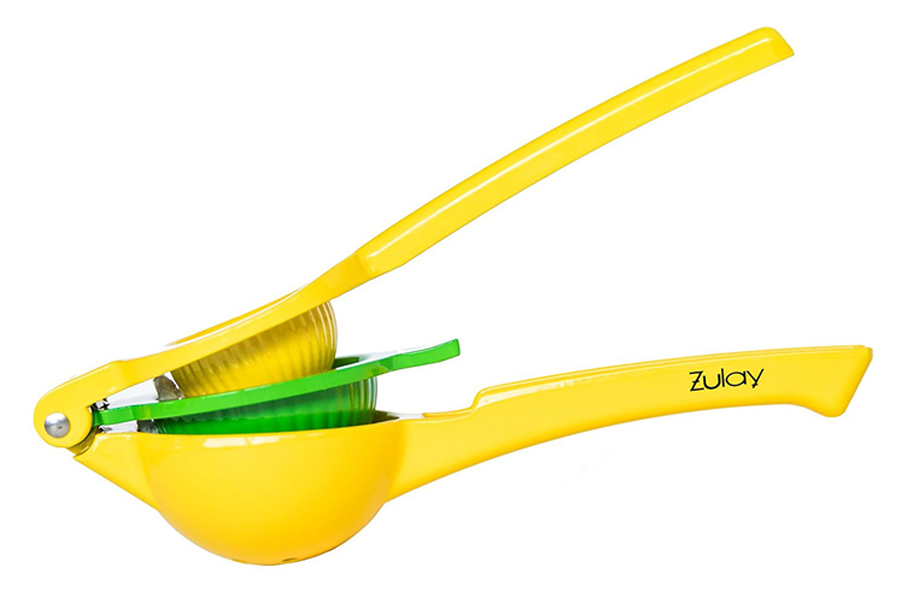 But hey, if you don’t want to shell out money for any new tools – or clean a tool! – I say go ahead and slice your citrus fruit four ways, or nuke it before juicing it to get the most juice out of your fruit. Tricks one and two probably will suit you just fine.

Oh, and by the way, to really really get the most juice out of a lemon or lime, your work starts in the supermarket. Be sure to pick fruit that feels heavy for its size. No matter what the fruit, or how many you’re buying. Let’s just say I’m the gal in the produce section with a lime in each hand trying to figure out which is heavier. If you ever see me doing this, feel free to ignore me. Or say hi. That works too.